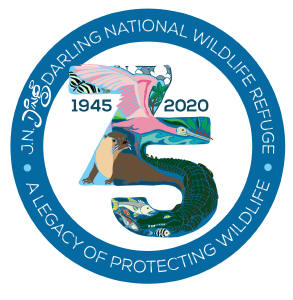 In 1945, out of fear for the wildlife and wetlands that claimed most of Sanibel Island, Jay Norwood “Ding” Darling succeeded in petitioning for the creation of the Sanibel National Wildlife Refuge.

Seventy-five years later, J.N. “Ding” Darling NWR, which adopted its creator’s name in 1967 following his death, celebrates its rich history and legacy on December 1, 2020. DDWS is helping to support a daytime celebration and will be hosting an evening gala to commemorate the refuge’s 75th anniversary.

The daytime celebration, in combination with "Ding" Darling Day, will be free and open to the public. It will combine a day of safe family fun, and special guests, while following CDC guidelines.

The Refuge and DDWS began celebrating the 75th Anniversary in 2019 with a full calendar of events, The COVID pandemic forced us to cancel some of those events, but we will be celebrating the actual anniversary date, December 1, 2020, in a big way.

Learn more about becoming a sponsor.