Facing staff shortages to handle its new administration building’s “welcome area” in 1982, the J.N. “Ding” Darling National Wildlife Refuge started a volunteer program, but needed help. That’s when the “Ding” Darling Wildlife Society-Friends of the Refuge (DDWS) came together as a nonprofit organization to, at its inception, support the volunteer program. It incorporated on October 6, 1982, with volunteers stepping in as officers.

This year, DDWS, one of the first two friends group created for the National Wildlife Refuge System, begins celebrating its 40th anniversary. During the past 40 years, its support of “Ding” Darling has widened broadly to embrace support of conservation education programs, research, land acquisition campaigns, internships, and staffing through retail operations -- two physical and one online Nature Store – and fundraising. 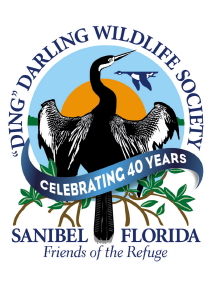 The celebration begins with the reveal of a new 40th anniversary logo for DDWS. The Refuge joins the group in planning a calendar of special events that include “Ding” Darling Day in October, the unveiling of “Ding” Darling’s own limited-edition Wild Daze Pilsner beer, the return of Project Refuge: A Couture Fashion Show Using Trash, a roseate spoonbill scavenger hunt in partnership with island businesses, four new specialty items (one for each decade) in the Nature Store, art exhibitions, and special lectures and other events.

“The Refuge would be a very different place without the support of our Society friends, so we are beyond excited to celebrate this milestone with them,” said Supervisory Refuge Ranger Toni Westland. “We will be honoring a long history of support that has helped make ‘Ding’ Darling one of the top, most robust refuges in the nation and its friends group a respected model for those that have followed.”

Through the four decades, DDWS has added to Refuge facilities starting with the current Visitor & Education Center, which was later built in 1999 by dedicated leaders and community support. Most recently, DDWS helped the Refuge bring the ambitious Wildlife on Wheels (WoW) mobile classroom project to fruition.

Other major recent accomplishments include the Wildlife Education Boardwalk, the upgrading and addition of numerous exhibits and trails, the completion of the award-winning America’s Best Restroom, the addition of solar paneling to Refuge buildings, and the acquisition of more than 92 acres of land on Sanibel Island. It has bused thousands of students each year for onsite education and now reaches over a thousand more with WoW.

“October 6, 2022, marks our official 40th anniversary, and we have a special committee headed by Terry Baldwin and Dick Levinson working on all the ways we plan to celebrate,” says Birgie Miller, DDWS Executive Director for more than 10 years. “We plan to include all the friends, partners, and supporters we have worked with over the years, without whom we would not be able to accomplish all that we have.”

Watch our website to learn more as plans unfold for the 40th anniversary celebration and to learn how to support immediate needs for land acquisition, habitat restoration, education, and biology staffing.